As the contact link between members of the extended Tikkanen family acts the Tikkanens’ family society, which was founded 4.7.1948 in Iisalmi. There are about 320 member families.

The family reunion will be organized every third year and a board will be elected by the reunion for the running of the activities within the family society. The chairman of the board acts as a head of the extended family.

The documents from the years 1950-1978 are missing. The society has been active since 15.7.1979, when Tauno Tikkanen from Pielavesi arranged a meeting and the working order of the society returned.

Since the foundation of the society totally 23 family reunions and one planning meeting have been organized during the years. But the documentations in two of those meetings have been scarce. Then there have many summer events during the years between meetings.

The main purposes of the society

The society will connect the extended family and respect the heritage of earlier generations.

The society is well aware of its roots in the Finnish countryside.

The society is meant to bring the kinship and solidarity between its members.

The goal of the society is the continuity of the activities in the changing world.

The focus of the activities within the society is the genealogy.

The history of the colonization

The original form of the name, Tikka (a woodpecker) is originating from the Karelian name tradition, where the common family names were bird names among other things. Later in Savonia Tikka got the nen-ending. Tikkanen means a little woodpecker. In Ostrobothnia the houses of the Tikkas and Tikkanens got the name Tikkala, which later could be taken as a family name. It was customary to take the name of the house for the family name in the western Finland, but also on the Karelian isthmus between the Lake Ladoga and the Bay of Finland in some extent. The same family name doesn’t necessary mean the kinship. On the other hand some of the Tikkanens changed their name to Ticlén and Ticcander/Tickander. Also in the North Savonia the name Tiikkainen might have its roots in the bad writings of the clerks. The name of the same person was written even in the same document differently, for instance like Tickanen, Tickain(en), Tijckaine(en) and Tickala, Tijkala.

During the ice age, over 10 000 years ago, the whole country and a large part of northern Europe was covered by ice and the movements of the ice from northwest to southeast and back, created the lake and river systems in Finland. Then much later that area was a natural transport route, because in many places forests were so dense that the usage of them as a transport route was almost impossible.

People have been living in the area of Finland since the melting of the ice. When the long lasting hostilities between Sweden and Novgorod, then the most important Russian state ended within the peace treaty in 1323 in Pähkinänsaari which is a little island situated in the Lake Ladoga near the river Neva. The border went from that place to northwest through the Finland ending near the present town Raahe.

It is possible that the border was that, but there isn’t left any real documents of the peace treaty or the descriptions of border line. They have found some border stones in the very beginning of the border line. In the archives of the both countries they have found very convincing papers about the treaty, but falsifications of various reasons.

Novgorod and its Karelians needed the open lake and river system for the trade and collecting the taxes. People, living in that area, used those routes for hunting and fishing, also finding new places to settle in. The Tikkanens also settled near those routes which were useful in their trade and the rumours of the coming tax collectors helped them to avoid the collectors. There aren’t any systematically collected literary documents of the ordinary people before 1540s and only documents of the taxation until the end of 17th century. Finally the church demanded the parish to keep registers to oversee the live of the parish members. Also the Swedish government started to collect statistical information of the people systematically around 1750.

Already before 1550s there were the Tikkanens’ settlements along the whole ancient Karelians trade route. Maybe more on its western than eastern arms. The only explanation for this fast expansion is that the first Tikkanens lived also on the Karelian isthmus. Around the big lakes there were lot of people living in the beginning of the 16th century in big households. Gustav Vasa, the king of the Sweden during the first half of 16th century, needed more funds and ordered the commanders of the castle in Savonlinna (Gustav Fincke and Klemetti Krook) to promise the Savonians a few years without taxes, if the extra people moved to north over the old border line. That also happened, but during the first decades many of the settlers were killed in raids made by Karelians.

On the map of the Finland can be found over 100 houses with the name of Tikkala or with the beginning of Tikkala. Most of them are situated on the capes, on the isthmuses between lakes or on the high hills. Those were the best places without the frost in the summer and good places to grow crops. So that means that there was one or two of the Tikkanens among the first settlers to choose the best places. 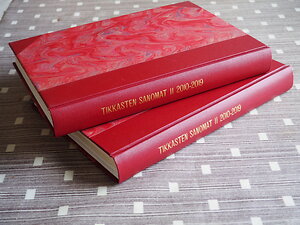